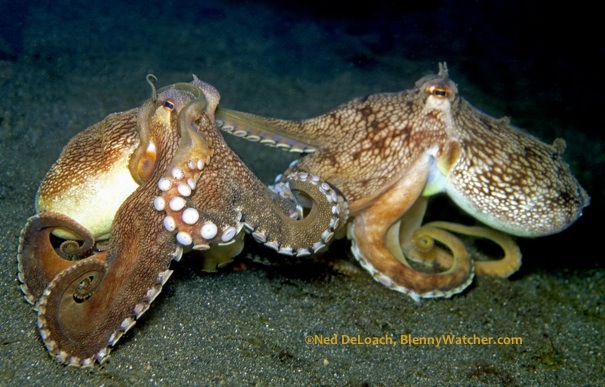 In the field, I scout for rare or unusual animals for Ned to photograph for our magazine articles. I use a video camera to record their behavior for later analysis and over the years have ended up with hours and hours of footage. From 2005 – 2009, our Scuba Diving Magazine column, “Encounters”, was accompanied by short videos that were available on ScubaDiving.com. Over the next few months, we’re going to post our favorites from that series. 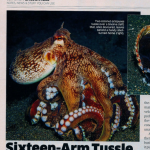 For two weeks in the summer of 2005, we dived with a pair of Coconut Octopuses, Amphioctopus marginatus. This cephalopod duo lived at Aer Prang, one of Lembeh Strait’s famous muck sites. We had the luxury of returning to the same dive sites so we visited almost daily. The octopuses seemed oblivious to us. Well, except for the day, early in the first week, when we found them out hunting and I picked up one of their abandoned bivalve shell homes. The owner made it clear that the shell was NOT abandoned – merely set aside. We made our peace and dived with them for the next 12 days. Our Encounters article, “Sixteen-Arm Tussle,” is scanned in here and the video is now re-loaded and accessible on the BlennyWatcher YouTube Channel: