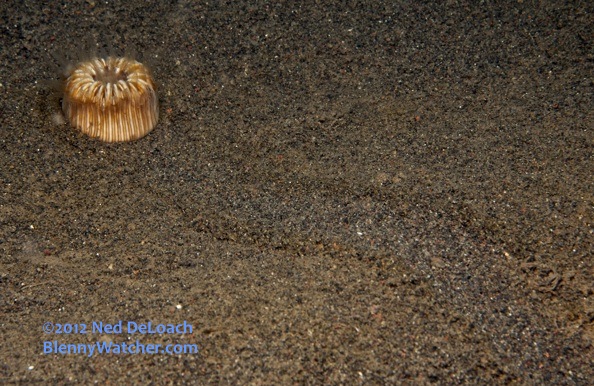 What mechanism allowed this coral to leave a trail in the sand?

Bali, Indonesia March 2012 ~ I am certain I just saw a coral move across the sand. I don’t have time to stop because I am swimming rapidly to keep up with Ned and our guide Eddy, but now I’m paying more attention to the individual corallites, scattered over the otherwise empty expanse of black sand. There are hundreds of them, spaced from inches to a few feet apart and when I see a second one move, I have to stop to examine it. I pick up the thimble-sized coral, expecting to find a little “carry crab” (one of the Sumo crabs that carry urchins, jellyfish and even discarded banana peels around to disguise themselves). No crab holding on, but I do notice a tiny hole on the underside of the coral. I doubt myself – did I really see it move? However, the corals leave a very distinct, 4-inch or so, trail in the soft black sand – very puzzling. Over the next hour, I see at least ten more corals move and each time I stop to watch, nothing else happens. Ned sees it too and gives me a shrug as he replaces a coral he has just examined. There are plenty of coral skeletons upside down or partially buried in the sand and he brings one back to shore so we can have a look. Eddy tells us this site, Puri Jati, is the only place he has ever seen the “walking coral.” 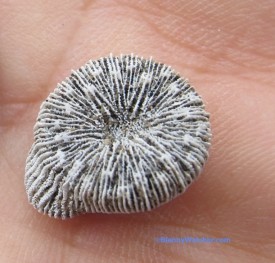 The top view of the coral skeleton 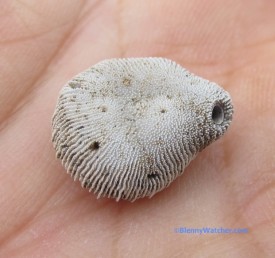 Underside of the coral – note the hole at one end

We move on to Tulamben to join a group of friends, among them, Ken Marks, who works with the University of Miami’s AGRRA team. Ned shows him the photos of the corals and within a day, Ken has an answer from Dr. Judy Lang. The corals are likely Heterocyathus or Heteropsammia, scleractinian corals that have a very interesting symbiotic lifestyle with a sipunculan worm (commonly called a peanut worm) that lives in the base of the coral skeleton and pulls it around in the sand. If you are curious about sipunculids, have a look here. Dr. Lang also provides a couple of links, including one to a 2001 publication: Antiquity of the scleractinian-sipunculan symbiosis, which makes me wish I had spent more time trying to capture video of these corals moving around on the sand.

Back in the States, I have a chance to read about them in Charlie Veron’s Corals of Australia and the Indo-Pacific. The coral larva settles on an abandoned gastropod shell that is already, or is soon, inhabited by the sipunculid. The growing coral spreads over the gastropod shell, leaving a tiny hole on the bottom from which the worm feeds and moves around. The worm keeps up with the growing coral by maintaining and continually extending the tube. Both organisms benefit: the worm keeps the coral from being buried in the soft sediment, righting it if it is turned over. In turn, it has a shelter that grows with it, so unlike other creatures like a hermit crab, which has to find a new home when it outgrows its home, the worm has a home for life. It is noted that both corals, belonging to different families (Heterocyathus is a caryophylliid and Heteropsammia is a dendrophylliid) have this same symbiotic relationship with sipunculids. I believe, based on our photos and video, that both Heterocyathus and Heteropsammia were present. The book confirms that they usually occur together, so we now have two new animals for our life lists! Here is some video from the dive:

« Kopi Luwak … At Last!
Mimicry: The Sole and the Flatworm »