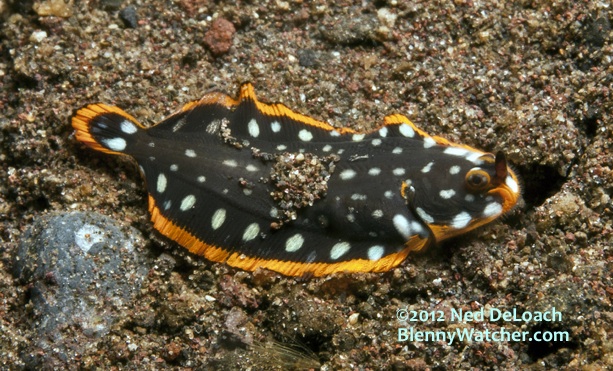 Bali, Indonesia – March 2012  We have this image of a lovely juvenile sole thanks to our friend Mark Willis who found it on a muck slope while the rest of us were photographing nudibranchs and a cool blenny. He had shown it to Ned and several others in our group but by the time I got there, it was lost. Mark showed me the image on the back screen of his digital camera; my pantomimed  “knife to my heart” was all it took to set him to hunting for it again and he found it!

From a video screen capture: The juvenile sole is the size of my fingernail

We had seen this or a similar appearing species in Lembeh Strait a few years ago. This little fish is often labeled as a mimic of a polyclad flatworm, but I have never taken the time to locate the source of that statement. Last year in Ambon, I saw one of the mimicked flatworm species, Pseudoceros scintillatus. More recently, on the NW coast of Bali, I saw a different but similar appearing species, Pseudoceros dimidiatus that seems a better match. I couldn’t remember where I first read about this particular case of mimicry so this seemed like a good time to try to learn more. A quick scan of the internet turned up a link to a 2010 “This Week in Fish” post from the Australian Museum that features a juvenile sole, Soleichthys maculosus that mimics the flatworm, Pseudoceros scintillatus but it has no reference. 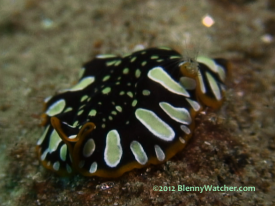 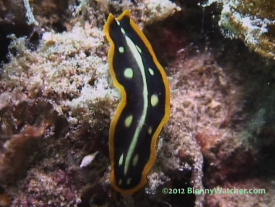 All my wandering around the Internet led me to wonder about the mechanisms in play that led to the sole evolving to mimic a flatworm instead of a nudibranch because it seems that many flatworms mimic toxic nudibranchs, to avoid predation.  Marine Flatworms of the World has some great examples of the flatworm-nudibranch mimicry. “Mimicry is hard to prove.” is Ned’s response when I wonder aloud. He is reading Sean B. Carroll‘s “Endless Forms Most Beautiful: The New Science of Evo Devo” for the second time, so our morning coffee discussions are full of talk of butterfly wings and mimicry. He suggests I read Randall’s  paper, A Review of Mimicry in Marine Fishes. Yep, there it is – the sole and a flatworm, along with two instances in which others figured the sole was mimicking a flatworm model. My question about the source of the sole mimicry is answered but now my mind is full of other questions – I’m afraid I’ve opened a can of, er, flatworms.  Here is some video of the sole and both flatworms: