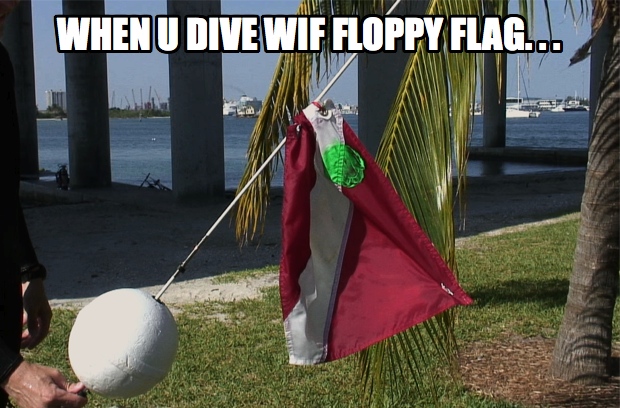 Ned got lectured because his flag slipped down the pole 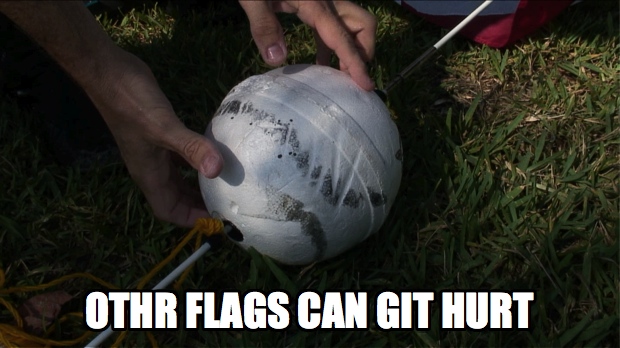 We just had three great days of diving at the Blue Heron Bridge having planned our trip to head home after this morning’s dive, before the Memorial Day holiday weekend craziness started. But we didn’t expect the craziness to start with an overzealous law enforcement officer (accompanied by a TV cameraman) whose boat snagged Eric’s dive flag in her effort to bust Ned, because his dive flag was not flying fully upright. A sagging flag is apparently an extremely dangerous infraction, which justifies driving a boat over divers in shallow water in order to deliver a lecture. WTF? We were diving in 8 feet of water, under the bridge span, far away from the boat channel and each had our own flag.

She started her angry lecture with, “I’ve been trying to get your attention for five minutes!” Umm…yes…Ms. Law Enforcement Officer, Ma’am? Umm.. there is no way anyone is surfacing with a drunk or crazed boater running his/her engine just above our heads (especially Ned who was staying low, shooting the Dusky Jawfish with eggs – located, by the way, thanks to the Mucksters). Poor Eric finally surfaced and yelled a few choice words at the crazed boater – oops, law enforcement officer – for snagging his flag (which, for the record, was flying at full-regulation erectness). For his trouble, he was ordered over to the boat and by the time the lecture was over and he descended again, the batfish he was shooting was gone.

We have handled this with humor because the situation was so very absurd but we could ask serious questions about the need to jeopardize other divers (there were at least 5 in the vicinity) in order to lecture one over a floppy flag. And I would love to see these conservation officers spend a little time observing other park visitors, like the punks, who two weeks ago were catching and torturing little pufferfish and the ignorant snorkeler who yesterday exited the water with a plastic grocery bag holding a beautiful and protected Cushion Sea Star – actually I’m glad the Mucksters were there to gently educate the snorkeler and return the sea star to the water – much more effective than showboating lectures.

Bottom line, it hasn’t dampened our enthusiasm for diving at the bridge and we’ll continue to make the four-hour drive down. But listen up out there: get your dive flags in order!!!