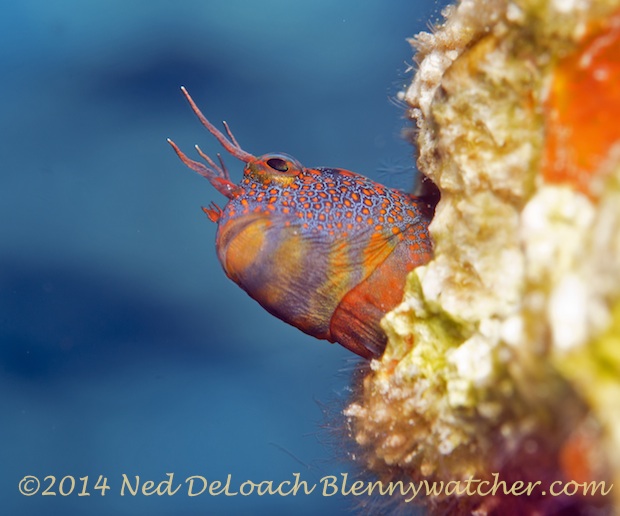 This is the most photographed Tessellated Blenny in the world and likely the most observed. I am certain of this. I spent hours with this fish and its reefmates –  I think I might have been obsessed. A few days after we arrived on Bonaire for our annual 5-week stay, our friends Allison and Carlos Estape (fellow fish surveyors) stopped by and told us about a site that had Tessellated Blennies (Hypsoblennius invemar) living in the barnacle shells. An abandoned, submerged mooring covered with a complex growth of sponges, barnacles and other invertebrates, this was perfect habitat for Tessellated Blennies. Enchanted by these colorful fish, we visited the site, dubbed the “blenny condo,” again and again regularly finding from 12 to 15 individuals, including one only a half-inch long. 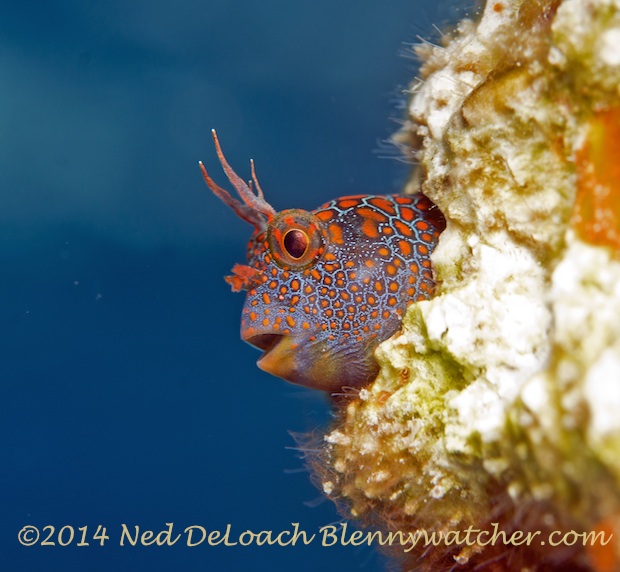 Above: another view of the same blenny. Of all the blennies at the condo, this individual had the most developed cirri. It was also the most photogenic, sitting in a barnacle shell that was free of surrounding growth. Over five weeks, Ned and I showed it and the others in the colony to many fishwatchers and photographers – anyone who was willing to spend an hour at eight feet to look at a tiny, 2-inch fish. Although the mooring was attached to the bottom, at a depth of 26 feet, all the blennies I counted were in the top ten feet of water. Looking up, you can see how close the top of the mooring is to the surface: 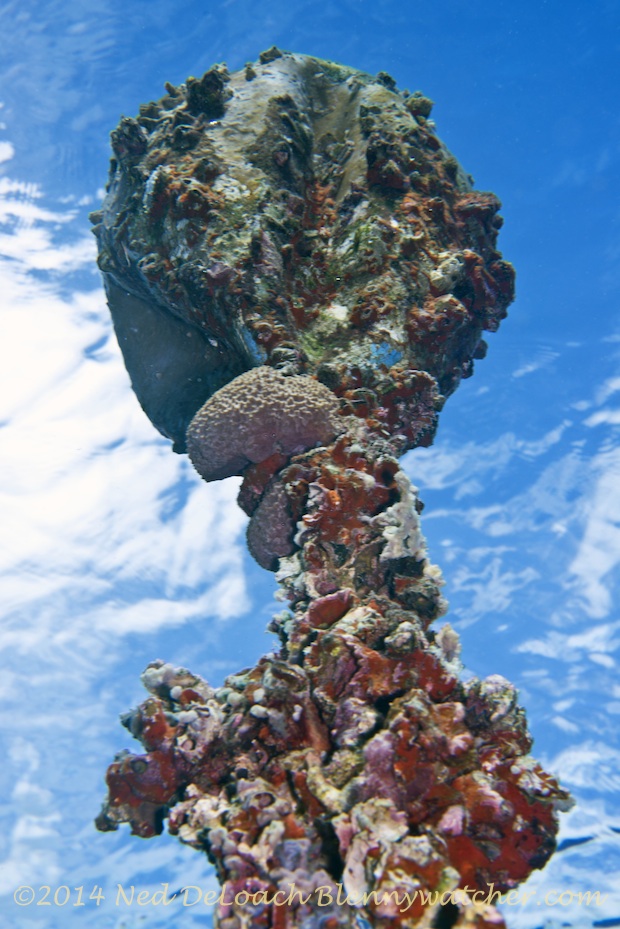 Hanging out at ten feet could be tough when it was surgy, but we made a number of dawn dives, when the water was calmer and the blennies were particularly active. I was able to distinguish some of the females from the males by their behavior. In many blennies, the nuptial males are colored differently from the females and young, non-breeding males. They are usually site attached, rarely leaving their holes – I think this is because they are either guarding eggs or trying to attract females to lay eggs there. The Tessellated Blennies that never left their holes were the most vibrantly colored and strongly patterned, which led me to believe they were the males. When what I thought was a female approached, the males exhibited a very distinctive head-bobbing behavior, often leaning way out of the hole, like this one: 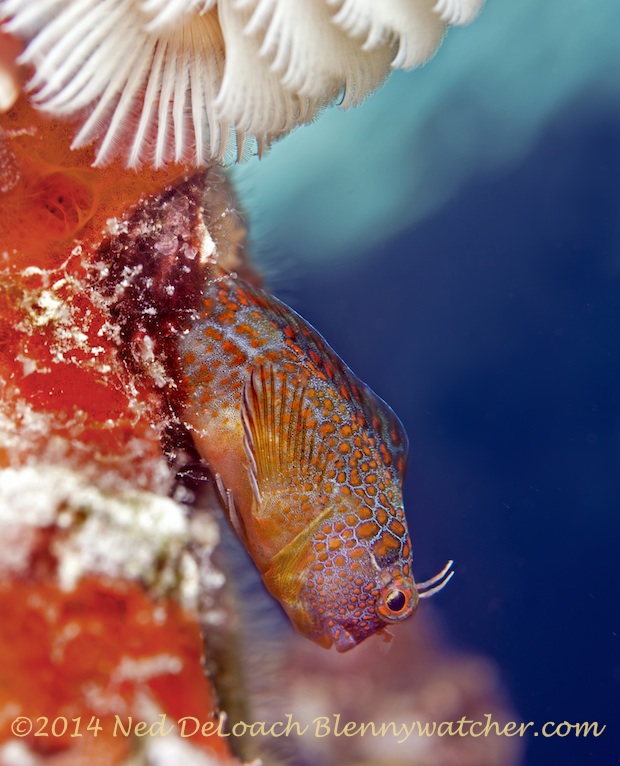 I could not tell the difference between the females and young males, but many were running around and getting into frequent fights with each other. When I saw a male going crazy, bobbing up and down like a mini-piston, I was certain the target of his showboating was a female, like this one that tucked itself into a shell after running around the male several times: 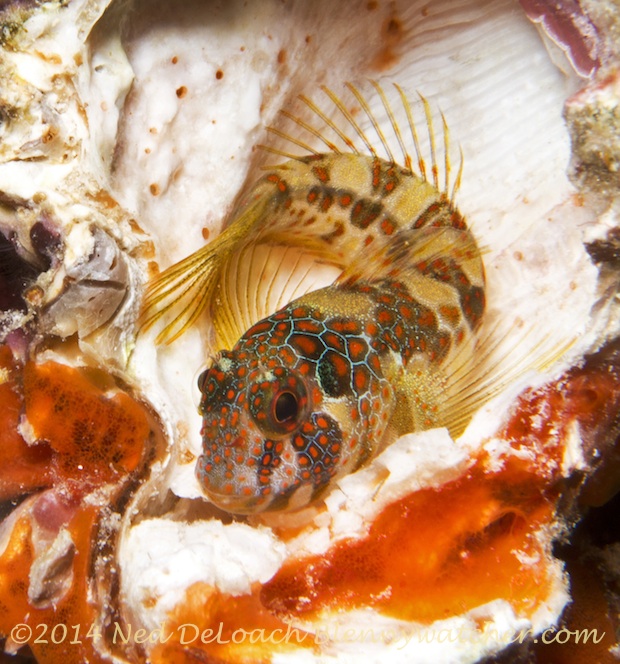 Ned shot dozens of photos of the Tessellated Blennies on the blenny condo but this is my favorite. I wuv de widdle toofees: 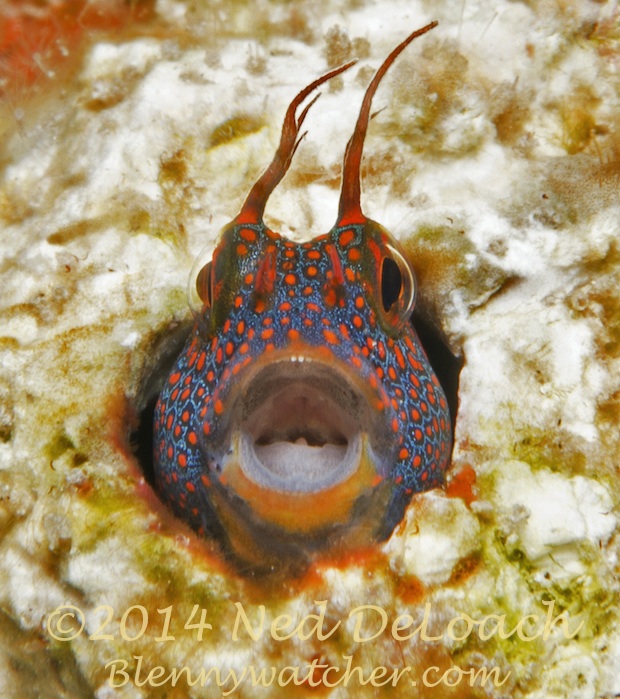