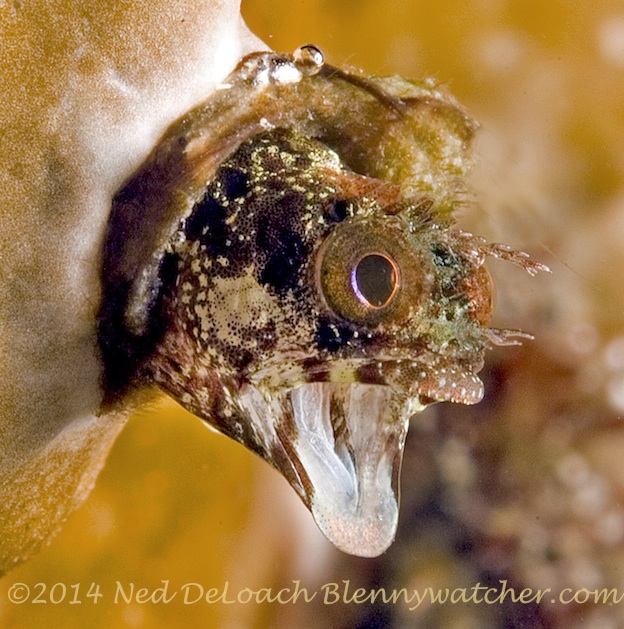 November, 2014 ~ If you have a photo of a blenny labeled Secretary Blenny, Acanthemblemaria maria, it is likely that you actually have a photo of a Spinyhead Blenny, Acanthemblemaria spinosa. A Google image search for “secretary blenny” produces pages and pages of images that are actually, with an occasional exception, Spinyhead Blennies. I have intimate knowledge of this problem — it has been wrong in Reef Fish Identification – Florida Caribbean Bahamas since the second edition (1994) and just sorted out in the recently published fourth edition of the book. Our field guides are written to help divers visually identify fishes in their natural habitat and even after 25 years, Ned and Paul still consider them to be works in progress, adding additional species and corrections, whenever practical, to new printings and editions. The Spinyhead Blenny – Punk/Christmas Tree Blenny – Secretary Blenny correction has been a long time in coming but with the help of Dr. Ben Victor the confusion has finally been cleared up. 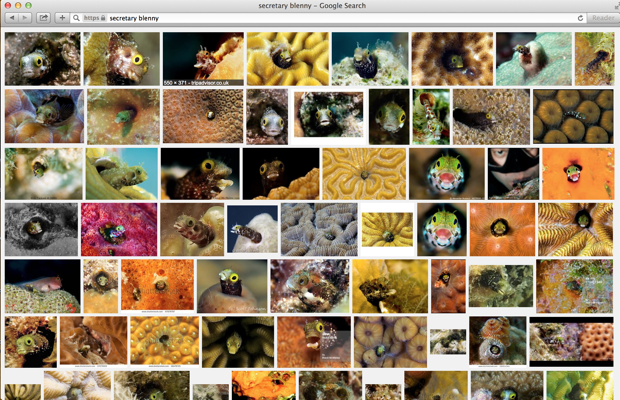 Figuring out how to visually tell the fishes of the genus Acanthemblemaria apart has long been an obsession of mine;  I read scientific descriptions, examined Ned’s photos (first slides, then enlarged digital images) and experimented with various macro options on my video camera. Everything seems obvious on paper or the computer screen but underwater, in a surge, identifying a tiny, moving fish presents many difficulties. Along the way, I’ve learned some interesting things, including how the Secretary Blenny got its name. If you are only interested in the details of how to tell the two species apart, then skip down to the end of this post where there is also a link to a short video. 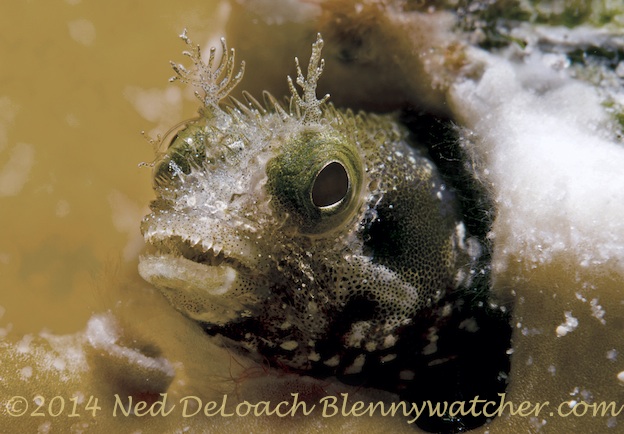 Fishes in the genus Acanthemblemaria are small, tube-dwelling blennies, distinguished from other blennies in the family Chaenopsidae by the presence of spines on their heads and around their eyes. The spines are not to be confused with cirri – the fleshy stalks over the eyes and snout – or the papillae, soft protuberances, which are present on the heads of some of the acanthemblemariids (A. medusa and A. chaplini). The number, size and shapes of these spines, cirri and papillae are features that distinguish one species of the genus from another, but these features are usually so small that it is difficult to discern the differences without the aid of magnification and a very still fish. One of my all time favorite publications about blennies is Atlantic Fishes of the Genus Acanthemblemaria, with Description of Three New Species and Comments on Pacific Species (Clinidae: Chaenopsinae) by William F. Smith-Vaniz and Francisco J. Palacio. For years, I pored over the descriptions in this paper and obsessed over the illustrations of the cranial spines and cirri, but just could not match them with what we were seeing underwater on live fish.

About nine years ago, in an effort to establish a visual identification key for divers, we consulted Dr. Bill Smith-Vaniz. Under his direction, we obtained a collecting permit in Bonaire and collected a number of specimens of what we thought were Secretary, Spinyhead and Medusa blennies. Our friend Claire Davies helped us locate, photograph and collect the fishes. Our goal was to work out a key for fishwatchers, using Ned’s photos, matched to the positive identifications obtained from Bill’s examination of the collected fishes.  But the results came back from Bill’s lab revealing that our collected fish were all Spinyheads and Medusas – not a Secretary in the bunch, even though we were certain we had collected some! That was important reinforcement that something was amiss in the visual identification of these fishes, but other projects took precedence and we set the question aside. 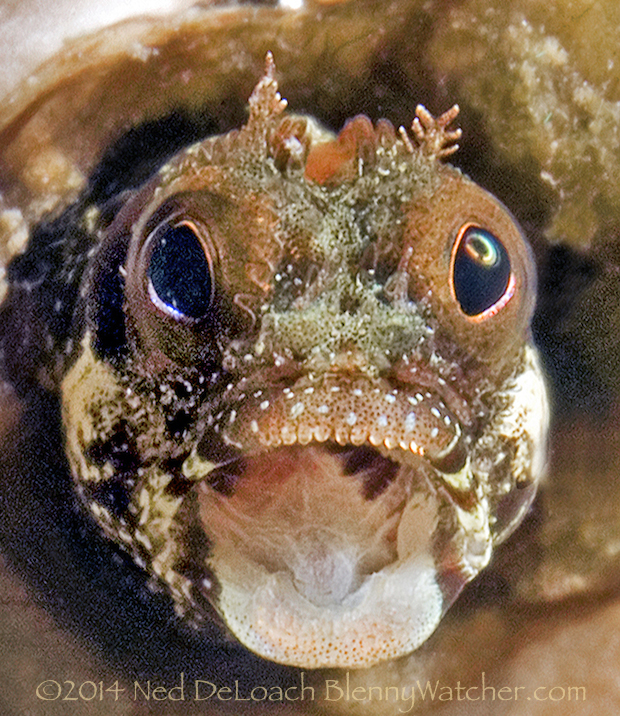 What people were calling the Punk is actually the Secretary Blenny

The next year, we visited St. Vincent, where we were shown the Punk Blenny, a reportedly undescribed Acanthemblemaria species that received its common name from the red flattop of spines on its head. In other areas, there were reports of a blenny that fishwatchers were calling the Christmas Tree Blenny, for its distinctive cirri. Around the same time, I saw a post in an online forum requesting help in determining whether a fish was a Spinyhead or Secretary Blenny and Ben Victor’s response, that the “CDs and books are wrong” and the Punk Blenny is the real Secretary Blenny. Ned and I finally had the opportunity to talk to Ben at length about the Secretary/Spinyhead confusion when he joined the ReefNet team and us for a two-week dive trip to Dominica in 2010 and we enlisted him to help set the record straight. Ben is both an ichthyologist and medical doctor who has conducted extensive research on larval fishes of the Caribbean (his site: http://www.coralreeffish.com ) and is familiar with the distribution of fishes based on collection records throughout the tropical western Atlantic. Ben confirmed that there is no such thing as a Punk or Christmas Tree Blenny. After asking around, I am pretty sure the Christmas Tree and Punk blennies were references to the same fish although it is possible that what people were calling Christmas Tree Blennies were actually Medusa Blennies (A. medusa). 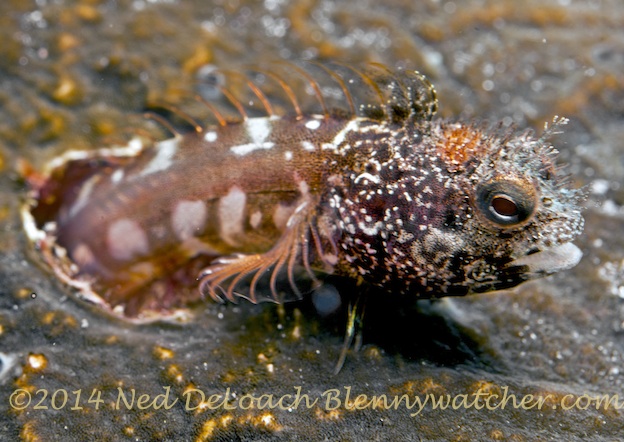 Secretary Blenny (A. maria) stretches out of its hole.

While waiting for the publication of the fourth edition of Reef Fish Identification with its additional photos and corrected identifications, I decided to dig into the scientific literature about Secretary and Spinyhead blennies. The Spinyhead, Acanthemblemaria spinosa, was originally described in 1917 from specimens taken in Curacao. In 1928, William Beebe and John Tee-Van described Acanthemblemaria variegata. In 1941, this was temporarily made a synonym of, i.e., considered the same species as, the Spinyhead (A. spinosa) by Longley and Hildebrand. In 1957, James Böhlke published The Bahaman Species of Emblemariid Blennies, in which he summarized the Acanthemblemariids known to date in the Bahamas. In discussing the Spinyhead, he includes the work of both Beebe and Tee-Van (A. variegata) and Longley and Hildebrand and noted some differences in spine counts between his specimens and those described by Longley and Hildebrand indicating that, “It is possible that A. variegata is the true spinosa and the above specimens represent an undescribed species;”

Sure enough, in 1961, he published, The Atlantic species of the clinid fish genus Acanthemblemaria, in which he sets the record straight, that A.variegata Beebe and Tee-Van is actually A. spinosa – the Spinyhead originally described in 1919 – and the blenny that was troubling him in his 1957 paper was in fact a new species, Acanthemblemaria maria, which he “Named for Mrs. Mary George, my secretary for the past five years and now parent and housewife, in appreciation of her assistance in all the activities of the department during that period.” So the new blenny was named to honor to Dr. Böhlke’s secretary, Mary George, hence the common name, Secretary Blenny (I love little tidbits about how fishes are named – see my Arrow Blenny post). I’ve heard suggestions that the common name should just be changed to Punk Blenny, but in deference to Dr. Böhlke and Mary George, I truly hope that never happens. The name “punk blenny” just adds to the confusion and should be dropped completely. 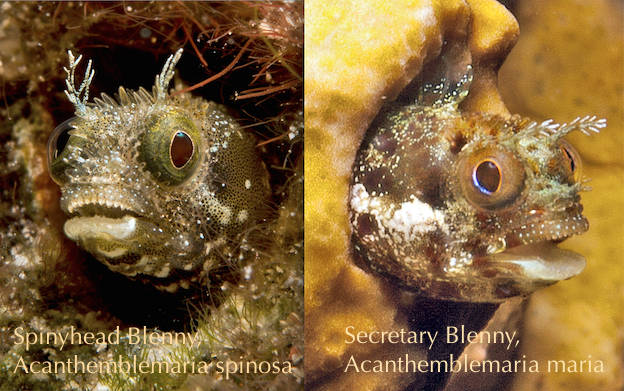 So to summarize: If you have a picture of a Punk or Christmas Tree Blenny, it is most likely a true Secretary Blenny. If you have a blenny photo labeled Secretary Blenny, check it again to make sure it isn’t really a Spinyhead Blenny. Both species have similar markings, including spots on their lips (except the Bahamas, where Secretaries’ lips have lines – note from Ben Victor). Spinyheads tend to have many uniform, short head spines, while Secretaries have fewer that are larger. The differences in their cirri are very difficult to see with the naked eye. The Secretary Blenny has a very distinctive orange patch over the back of the head, tends to be larger than Spinyheads and we have always found them in areas of high-energy or surgy water and rarely below 25 feet. Ben also notes, “There are no records of Secretary blennies in Florida or Bonaire. There are no records of Spinyheads in Florida or Panama.”

Unsure of your blenny? Here is a short video of the two (click on the video or this link: http://youtu.be/547ug856_Bc ) and be sure to like our FaceBook Blennywatcher page for more updates.