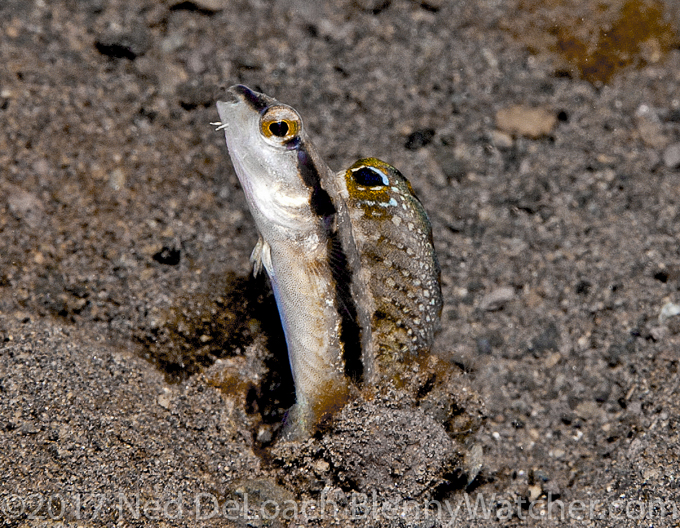 Meet Adelotremus deloachi, a new fangblenny from Indonesia. Named after my husband and co-founder of this blog, Ned DeLoach, who first brought this fish to the attention of scientists in April 2012. It is only the second species in the genus Adelotremus, a genus that was first described in early 2012 with the discovery of the Red Sea species, Adelotremus leptus.  Adelos comes from Greek for “concealed” and trema for “hole”. Also known as sabertooth blennies, the six fangblenny genera are organized into the tribe, Nemophini. The two species in Adelotremus are quite small; only about and inch and a half long and unlike some other blenny species, appear to live at varying depths.

Last week, just before leaving the port of Maumere, Indonesia aboard the Dewi Nusantara, we made a last minute check of our email and caught up on all our favorite blogs. What a nice surprise to find an email from Dr. Bill Smith-Vaniz informing us that he had completed the description of the tiny fangblenny and named it in honor of Ned. The news had already made it to several popular fish blogs like Advanced Aquarist.

In early 2012, we spent two weeks diving in the area of Tulamben, a popular dive area on the northwest coast of Bali, Indonesia. Ned saw the blenny on the last day of our extended dive trip to Bali. We were cruising along the black sand bottom at about 60 feet (20 meters) depth when I saw Ned stop suddenly. He held up his hand as a warning to our guide and me to keep us from spooking whatever he was looking at. I gave him wide berth, wandering up the slope to the shallows but Ned stayed in place for over 40 minutes. At one point, a guide in the group came up to our guide and asked if Ned was OK, indicating with his hands, that Ned was sleeping.

Ned finally surfaced, insisting that he had seen an undescribed fangblenny – he was certain of it – and sent his photo off to ichthyologist and fish taxonomist Bill Smith-Vaniz. We were already packed and on our way back to the States when we received word that Bill had requested that the fish be collected. Drs. Gerry Allen and Mark Erdmann of Conservation International have been working for years through a partnership between CI and the Indonesian scientific community to document the reef fishes of Indonesia. Mark, who lived in Bali at the time, returned to the site with the assistance of our trip director, Doris Hugg, who knew to ask the guides to take them to the spot where Ned was “sleeping”. Mark collected what turned out to be a male specimen of the blenny. Bill was hoping that one of us would locate a female to complete the descriptive process but for several years after this first sighting, none of us saw another.

Fast forward to November 2015, where we were making our last dive of a month-long visit to Lembeh Strait, Indonesia. I was wandering in the shallows(18 ft/6 m) of a black sand bay when I saw a tiny head peeking out of a worm tube. I was able to mark the spot with a few twigs and set off to find Ned and our dive guide, Mann. With the three of us closing in, the nervous fish finally slipped out of its tube and swam around the mostly featureless bottom and to our delight led us to several others of the same species. Ned again contacted Bill, Mark and Gerry who asked us to collect a female, if possible. We had already packed up our gear for the trip home but Ned and Mann went back out the next morning and collected two specimens. 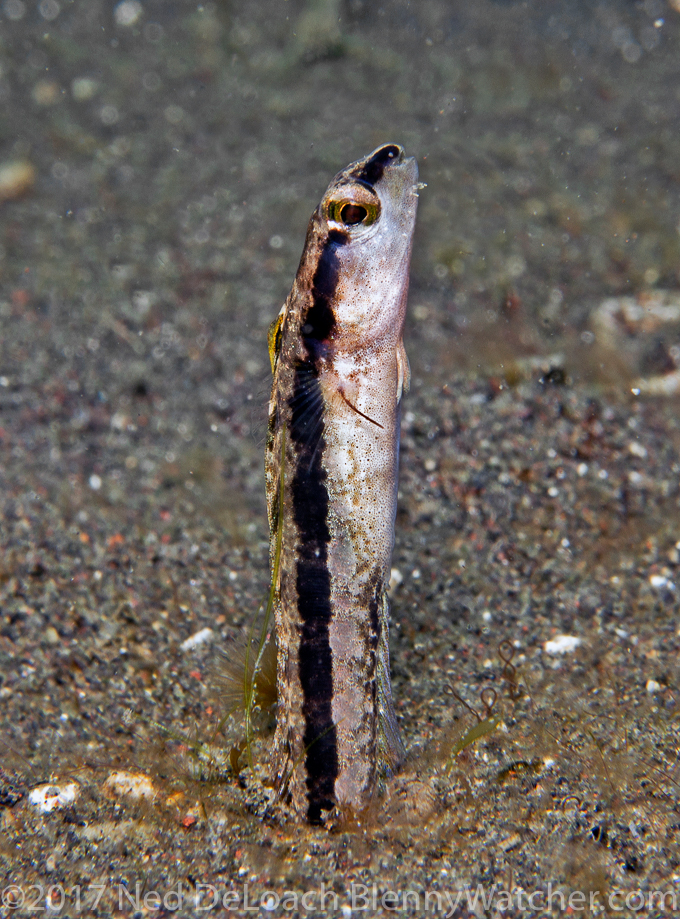 It is curious that both sightings of the blenny, in Bali and Lembeh, were on sites visited a lot by divers. These are tiny fish, living on dive sites famous for more charismatic fauna, so they were likely overlooked in the search for things like the Mimic Octopus and Ambon Scorpionfish.  Over the years, we have made many dives on the Lembeh site – who knows what else we’ve missed! 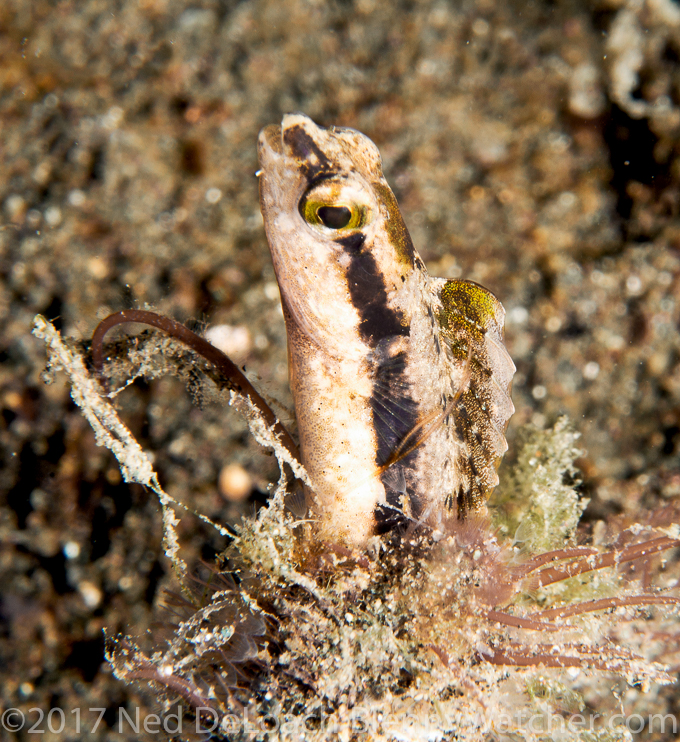 This video is from the dive in Lembeh Strait. The first male remained in his hole for quite a while, until we made him nervous and he took off, leading us to a female in a small pipe/tube. While following him, we encountered a second male out swimming.

« A Blenny for Your Day
The Reluctant Blenny Hunters »