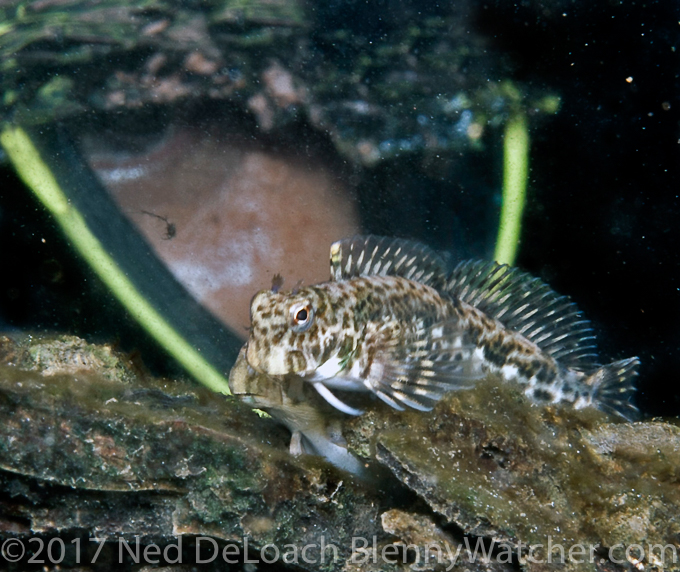 Indonesia, May 2017 ~ Ned and Yan were reluctant blenny hunters for sure. Janet Eyre and I informed them that we were changing the afternoon dive plan. We wanted to skip the reef and have the boat drop us near the shore, at the base of an old lava flow, instead. Janet was surveying fish for REEF and I was hunting for blennies. We were on a roll, having added the Sulu Blenny (Meiacanthus abditus) to our life lists just that morning. “Be brave”, “You’ll thank us later”, “Suck it up” – nothing we said seemed to help. Ned walked around the boat telling everyone that he and Yan were being kidnapped. I sort of understood because this was the reef where I discovered the beautiful flasherwrasse that ended up being named Paracheilinus alfiani, in honor of Yan. But since 2014, we have dived this reef at least 10 times and we had all seen plenty of P. alfiani – C’mon guys, time to change it up! 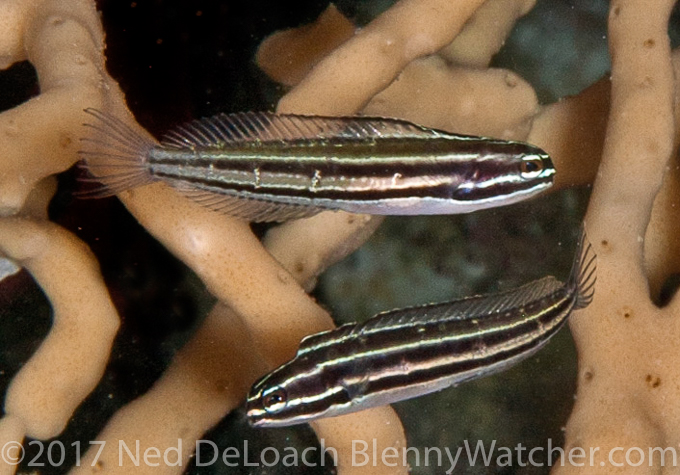 We saw Sulu Fangblennies on a deep dive earlier in the day.

The tender dropped the rest of our group over the lovely, fishy reef then took us close to shore, where we back-rolled into the shallows near a large fallen tree. There was nothing but silt-covered rocks and the occasional bit of coral for as far as we could see. It was great. We found a Fine-spotted Blenny (Salarias guttatus) immediately. Ned and Yan grudgingly embraced their assignment to photograph every blenny that Janet and I pointed out. 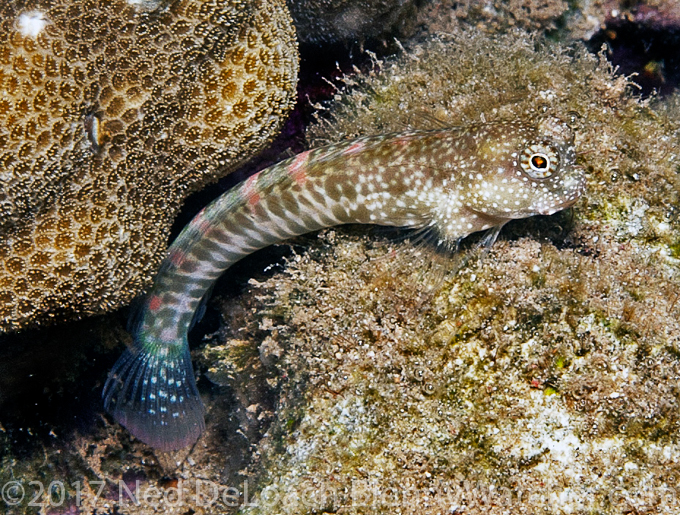 Fine-spotted Blenny trying to blend in.

I lost my head for a minute and went sailing off after a pair of fleeing fish I didn’t recognize then gave up and returned to our blenny mission. Janet later identified them as Whipfin Silverbiddys (Gerres filamentosus) – another for my life list. I include a grainy screenshot from my video, only to record the sighting: 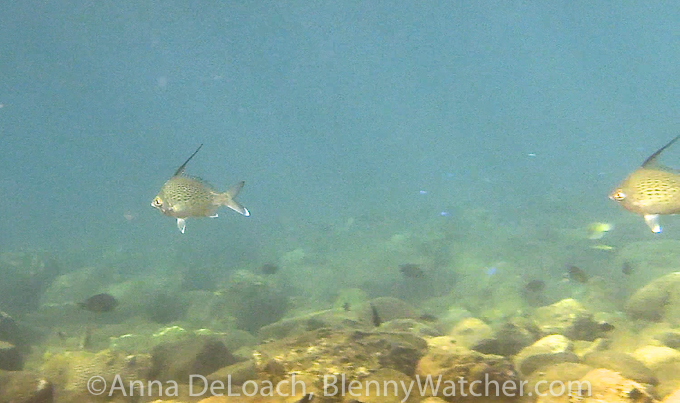 We worked our way toward the tree, finding quite a colony of blennies in a pile of larger rocks. I need to write a blog post about how to visually tell the difference between the Jeweled Blenny and the Ceram Blenny. They can both be large, they can be light or dark and we often see them in the same shallow habitat. Ned took shots of both: 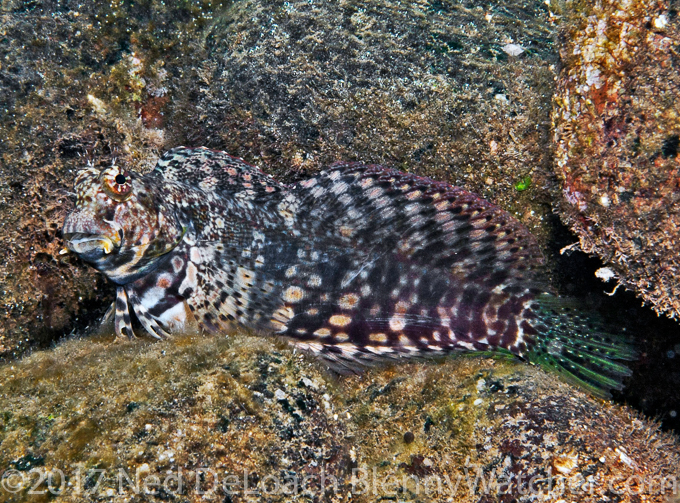 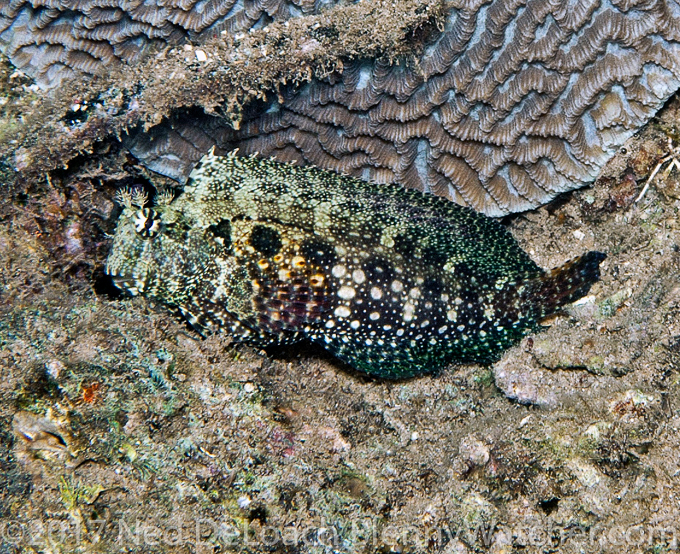 Right before we reached the tree, Janet showed us a very pretty goby (she loves them – we have to indulge her), then we started looking in the tree branches. Yes! There were several blennies with large, paddle-like cirri. We were now in about 3-4 feet of very surgy water and it was impossible to hold still long enough to get a good, long look.

Blenny hunting tip: we often find a variety of blennies, including rockskippers and fangblennies, in the branches and roots of fallen trees. Because the blennies scoot to the other side of the branch, it is helpful to have your buddy position himself on the other side so you each have an equal chance of seeing/photographing the fish.

Nothing like a challenge. Ned and Yan,  now in full-on blenny hunting mode, went after them like a couple of kids. Realizing that there was no way four of us with all our dive gear on could get in close, Janet and I stayed out of the way and watched. Besides, it was a lot more fun watching the two climbing under and over the tree, with and without their gear, than it was to survey fish. Ned admitted later that he was so into it that he forgot he had a tank on his back when he started climbing over the tree. 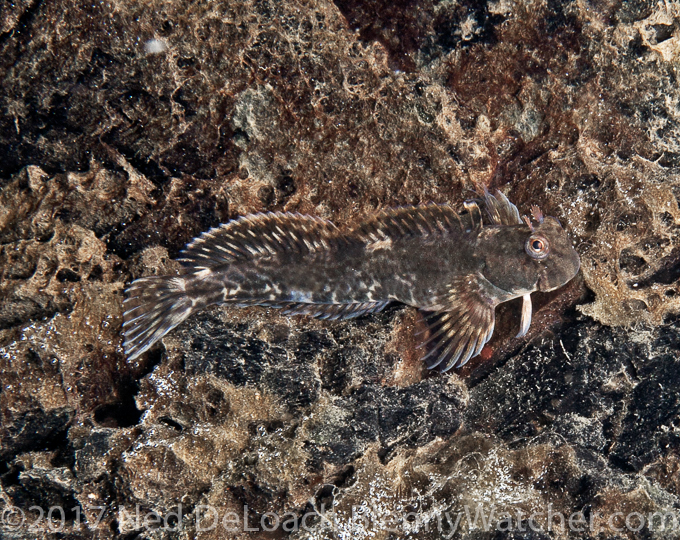 I surfaced long enough to tell the tender crew, who were watching, to go ahead and take the rest of the divers back to the boat when they were ready and come back for us later. I said, “Hi” to some kids who were perched on the rocks above us. It took a while but Ned and Yan got the shots. We made it back to the boat with all our dive gear and all our cameras and Janet and I didn’t even have to say, “I told you so.”

Some of the blennies on the log were very dark and some light. There was some disagreement among us about whether they were one or two different species. Dr. Gerry Allen (Allen and Erdmann’s Reef Fishes of the East Indies) confirmed the identification – they were all the Ambon (a.k.a., Big-nose) Blenny, Paralticus amboinensis – another for my life list.